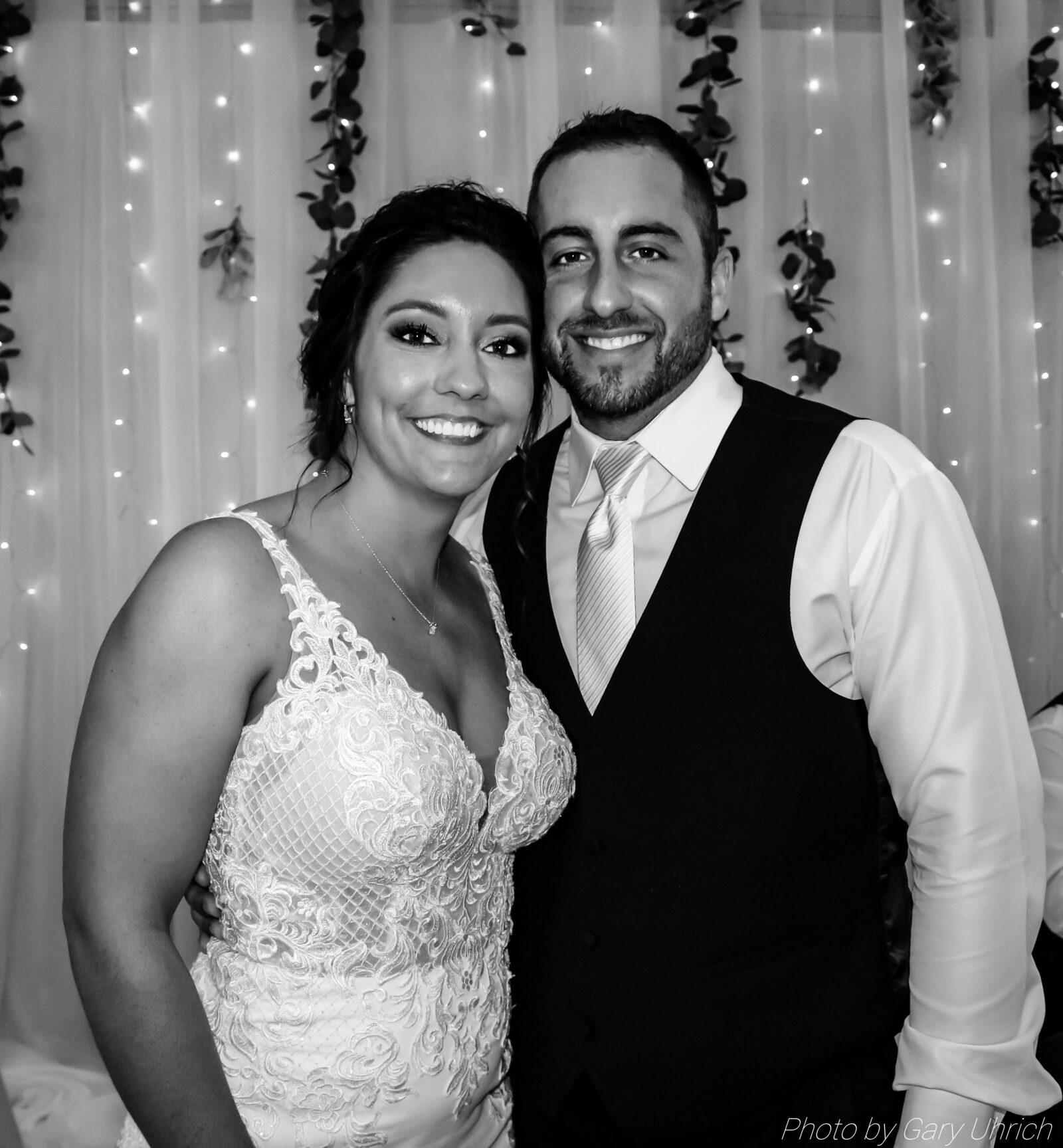 Kaitlin emailed me back in January about their upcoming wedding to see what I charge for a reception. This is the most common question I (and most every wedding vendor) gets when first contacted. Well, I needed to find out more about their plans, hours, etc. Not only did I get to find out more info, but she also discovered that her fiance, Dillon, is a cousin of mine! Several of my relatives have been to receptions where I was the DJ and spoke highly of my service. So, it was definite that they wanted me as their DJ!

This amazing couple was so great to work with throughout the planning process and during the week of their wedding. Their reception was at the Weborg 21 Centre and we had just decorated Jaime and Troy's reception and two other weddings! So, we had decor to put away and more to get out. While we were doing all that during the week, Kaitlin and Dillon were helping us with that and helping to decorate their own reception...that's how nice and helpful they were!! 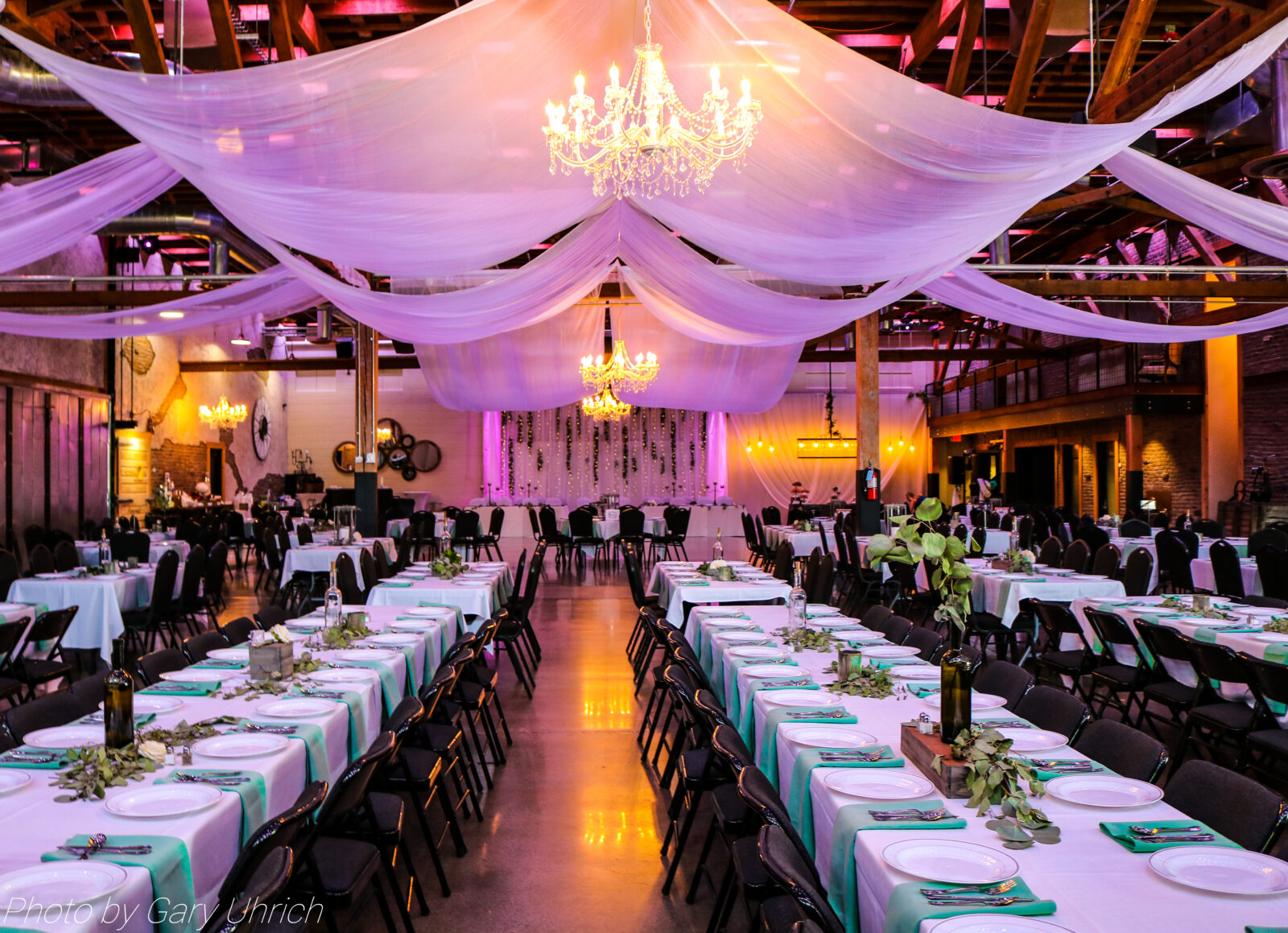 The challenge we had at Weborgs was how to set up seats for nearly 600 guests, plus a place for the food tables, cake table, popcorn bar, gift table, two bars, photo booth, dance floor, and yes, the DJ!! We drew up several different maps and ultimately came up with a brilliant setup that totally worked and still left plenty of walkway throughout the centre. (Fun fact, we also had another wedding at Weborgs the next day, so we had to come up with a plan to flip it all for the following day!)

The reception started and guests enjoyed the popcorn bar along with some refreshments. While I walked throughout the Weborg 21 Centre I saw so many of my relatives. It felt like a combination of a reception and family reunion to me! Dinner actually started before the wedding party arrived. This was done intentionally as Kaitlin and Dillon didn't want their guests to wait, plus we needed to get about 600 people through the food lines. I've been doing weddings for many years and the food line is something that generally takes a lot longer than most couples think. I've even had some couples tell me they think dinner will be "like 10 minutes or so," but most dinners take much longer than that...but that's a story for another time.

Before we get to another part of the night, I'd like to say it was great working with their photographer, Jac Reynolds of Devoted Eye Photography.  Jac is great to work with at weddings.  I met him about 2 years ago at another wedding and he mentioned how much he enjoyed listening to me when I was on the radio.  He has a down-to-earth personality and does a fantastic job with pictures.

We shuffled everyone through the food line and magically as soon as the last of the guests went through the food line, the wedding party arrived!! It timed out perfectly! We did the grand introduction, then let the wedding party eat, followed by cake (and doughnuts!), then toasts, first dances and then it was time to party!! I knew one of the main parts of the night that the bride and groom were excited about was the DANCE...and dancing, they did! I knew some of the wedding party and seen them at other weddings, then I quickly noticed several of the guests from other receptions who were definitely the party type. 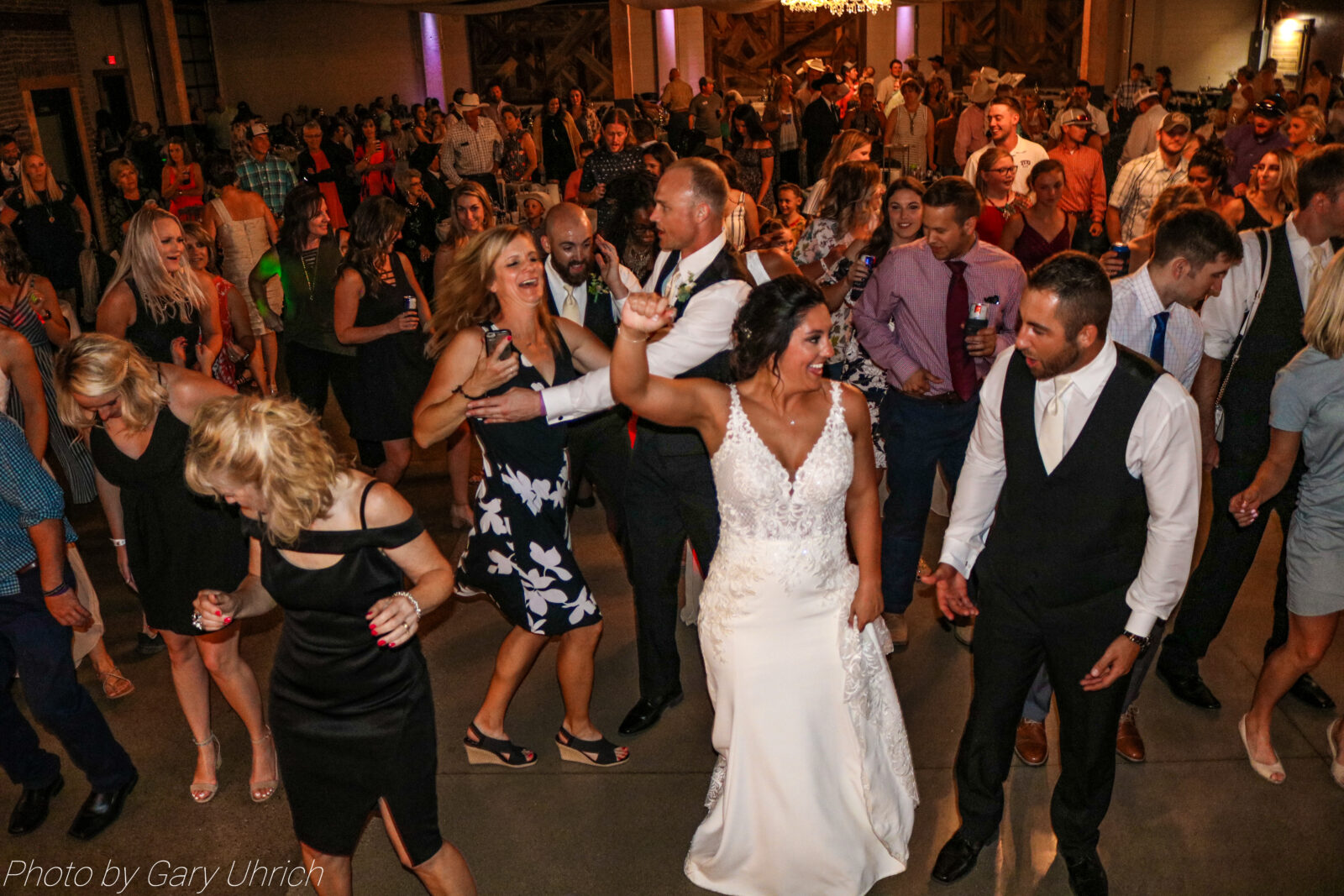 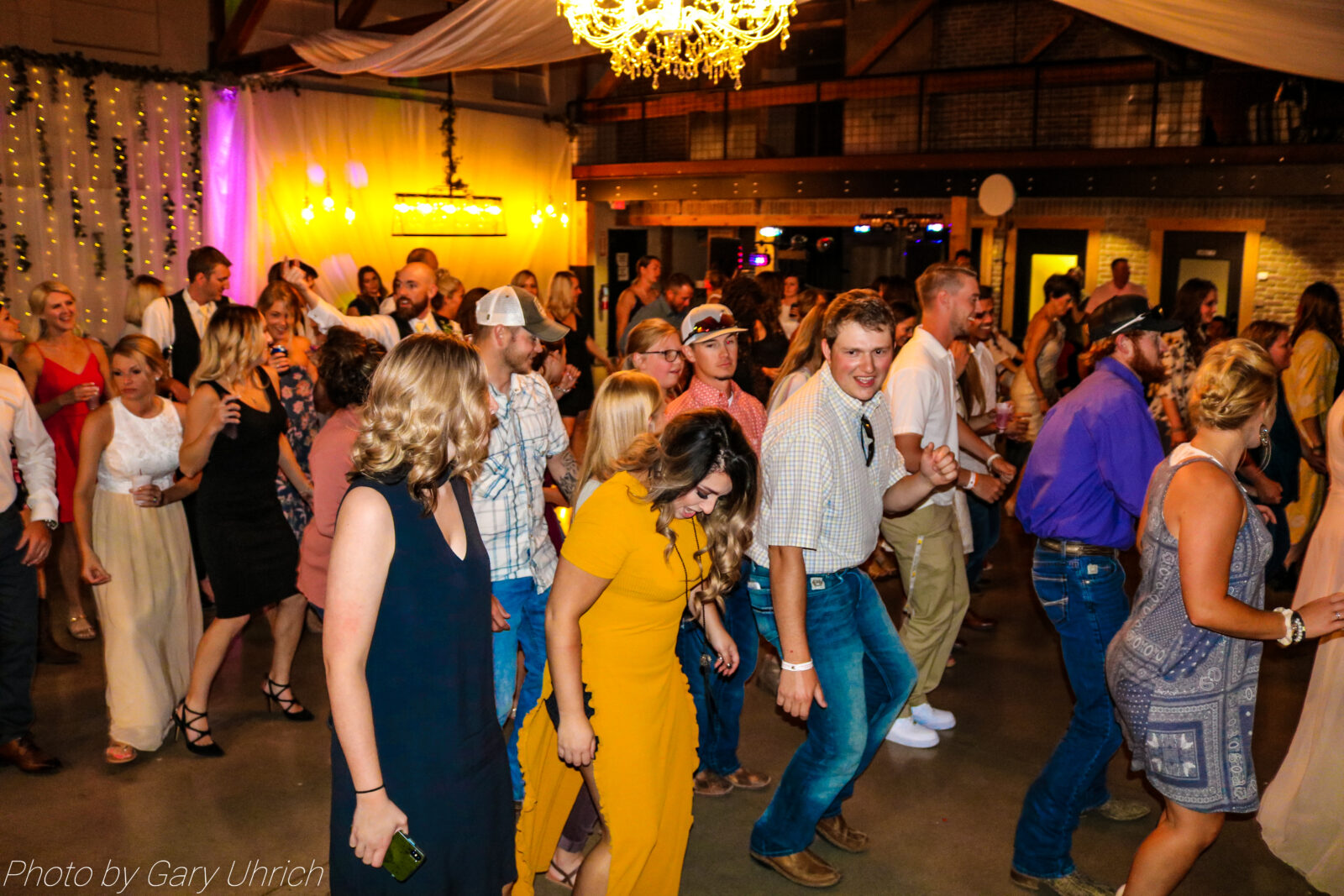 While I'm at it, I thought I'd share a funny story (at least it's funny to me) about something that happened during the reception:

There was a moment during the reception that still makes me laugh every time I hear any Luke Combs song.  So, it was getting a little later into the night and I had one of the guests come up to me and requested the Luke Combs song "Beer Never Broke My Heart," which is a good song, well, maybe not for a reception, but a fun song none-the-less!  Well, after the guest requested the song, I said to her "I love that song!!"  I could tell she was excited that I was going to play it and went back to the dance floor.  A few songs went by and I hadn't played it...yet.  She came back up to me wondering why I hadn't played it yet, however, I had soooo many requests that night, I just simply hadn't played it by then.  I told her it was coming up, to which she said to me "C'mon, play the song, he's your favorite artist!!"  I said, "I will," and as she walked back to the dance floor, I had to laugh to myself thinking "I never said Luke Combs was my favorite artist, I just said I love that song."  Since then, whenever I hear a Luke Combs song on the radio, I say to myself and sometimes out loud, "MY FAVORITE ARTIST!!!!"  Don't get me wrong, I really do like a lot of Luke Combs songs!

Everyone had so much fun, lots of requests, a garter auction, dancing, and celebrating!! The evening was going by so fast and before ya knew it, it was already 11:00 p.m., which was the time I was booked until, but I had a good feeling that it was going to go later. Sure enough, I checked with them at about 10:45 to see if they wanted to go until midnight, and yes they did!! I did my best to wrap up at midnight, but heard everyone chanting "ONE MORE SONG, ONE MORE SONG!!" I happily played one more song, and then another song, and then...another song!! Guess what was next? "ONE MORE SONG!!" However, I already played one more song...THREE songs ago! 🙂

At this point, I needed to finally wrap up. We had a fantastic crew working that night to tear everything down, sweep, mop and set up tables for the next day.

While we were just starting to tear down, there was ONE MORE memorable moment that was about to happen and something set off an alarm at Weborgs. Don't worry, nothing actually happened, just some sort of false alarm, but it triggered the emergency call and the Gering Fire Department showed up.  On a lighter and fun note, this prompted a rare moment where the bride and groom got to have their picture (see below) taken on a fire truck! How many couples get to say that or share that moment for the rest of their lives?? 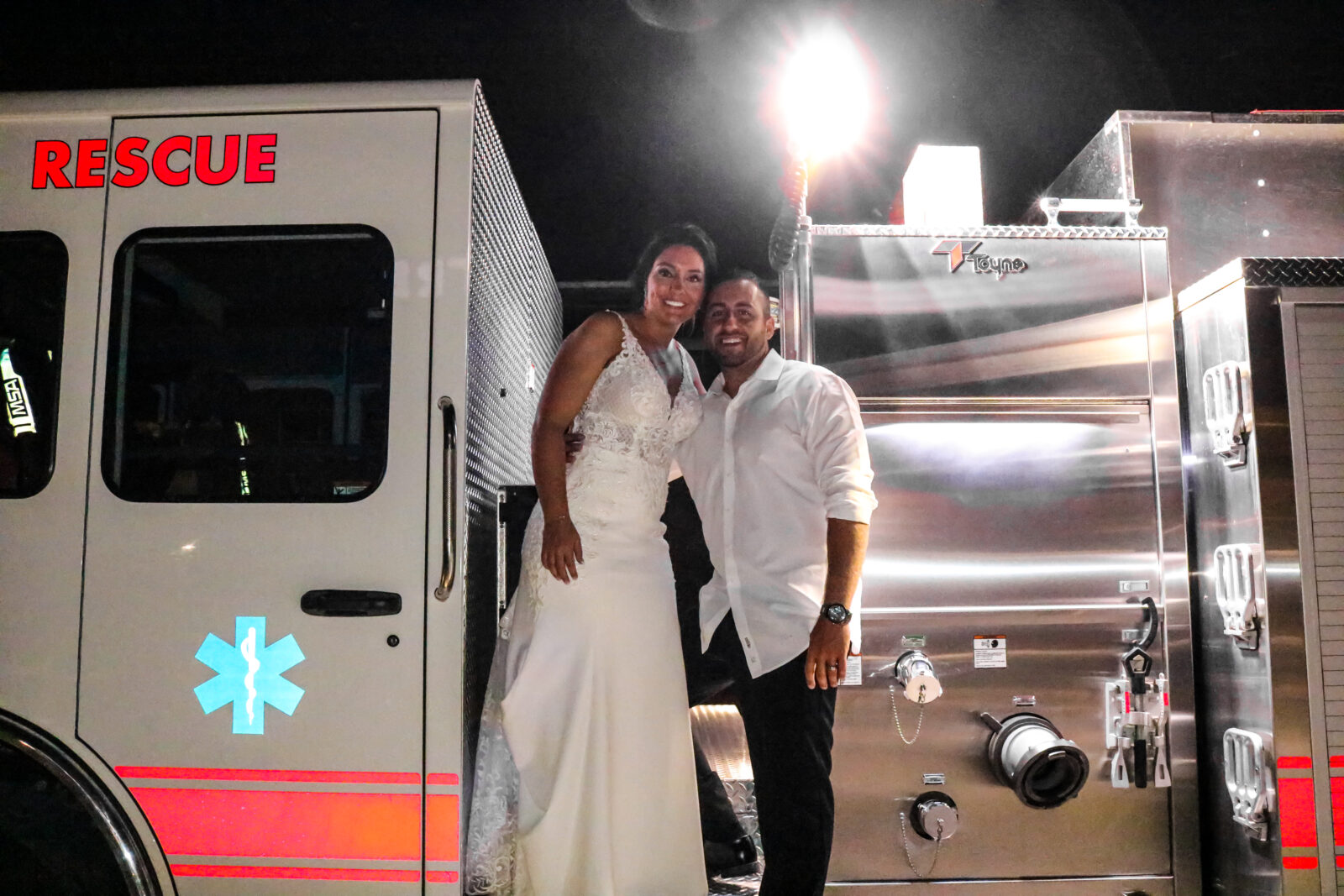 A short while later the night finally wrapped up as far as this reception was concerned. Now, it was onto setting up the next wedding for the next day...well, technically that day since we were past midnight. When we were putting together the plans for the two back to back weddings, we tried to make it to where I could set up in one place for both. We weren't able to do that, so I had to tear down where I was set up and cart everything over to where I was to set up for Saturday's wedding. I stuck around after I got all my gear set up to help out. I believe I called it a night at around 2:40 a.m. and then was back at Weborgs later that morning for rehearsal, but I'll talk more about that in Stephanie and Levi's blog.

Congrats to Kaitlin and Dillon! I wish you two the very best!!